Tamil Nadu “A GIFT TO CONNOISSEURS OF ART AND CULTURE”

Chennai houses Fort St. George, built by the British in 1653, St. Mary's Church which happens to be the first English Church in India and the Marina Beach, said to be the longest beach in the world. The shore temple at Mahabalipuram sculpted from a single rock, shows enthralling scenes of everyday life. The circular Church of Little Mount, Theosophical Society are good examples of an amalgam of Hindu and Christian Architecture. The Government Museum and Art Gallery have a good archaeological section and an excellent selection of South Indian Bronzes.

Tanjore is another place worth visiting, well known for its Brahadeeshwer Temple and the creation of south Indian musical Instruments and Tanjore plate artisans. Madurai, saturated with sculpture and stone pillars, and Rameshwaram, from where Prince Ram reputedly launched his invasion to ancient Ceylon are a must see. Tiruchirapu is famed or its cherots. Kanyakumari is the Southern tip of India where a Temple to the Virgin Goddess and a memorial to Mahatma Gandhi are built. It also has a beautifully designed memorial to the Hindu Missionary Swamy Vivekananda. Ooty, Kodaikanal and Yercaud are the favorite getaways if you are through with the heat of the plains. In wild life sanctuaries like those of Maumalai, bison, jackals, deer, panthers and scaly ant-eaters are likely to be seen.

FORT ST. GEORGE - houses a fascinating collection of Raj memorabilia in the Fort Museum. The original fort was built by the British East India Company in 1653. The fort has since then had a facelift; it now functions as the Secretariat and the Legislative Assembly. The banquet hall upstairs was built in 1802 and has paintings of Fort St. Georges governors and officials of the British regime. Visitors can also see Robert Clive's House in the vicinity. It is now the pay accounts office which has Clive's corner open to the public.

MARINA BEACH - is a sandy stretch that extends for 13 km in Madras. It is the pride of the city and is the ideal place to enjoy the cool evening breeze. On the sea front are memorials dedicated to political leaders and freedom fighters. Noted impressive Indo-Saracenic styled buildings like the Chepauk Place, once home of the Nawabs of Carnatic, the Madras University and the Presidency College add considerable grandeur to the spot. The Aquarium, Light House and promenade of walks, gardens and drives enhance the attraction of the place.

MEENAKSHI TEMPLE - of Madurai is an excellent example of Dravidian architecture, with gopurams or multi pillared halls, covered from top to bottom, in a profusion of multicoloured images of gods, goddesses, animals and mythical figures. The temple can be entered from any of the four sides. It occupies an area of around six hectares. The museum or the Temple Art Gallery, is located within the temple and has beautiful stone and brass images, examples of South Indian scripts and friezes.

KODAIKANAL- is not called the "The Princess of Hill Stations" for nothing. Its evergreen flora, fascinating natural beauties and the Kurunji flowers that bloom once in 12 years makes the place a wonderful mountain retreat. Thickly wooded slopes, deep valleys, waterfalls, streams and marshes makes it a veritable paradise for those who love a quiet and pleasant holiday. There are a number of picnic spots in the midst of picturesque scenery. It is an ideal health resort as well.

KAMAKSHI AMMAN TEMPLE - Built by the kings of the Chola empire in 14 A.D, this temple is the focus of religious activities in Kanchipuram. Unlike the other temples which are governed either by the Department of Archaeology, Government of India, or the Hindu Temples, the Kamakshi Amman temple is closely controlled by the Sankara Mutt. The significant features of this temple are the Golden Vimaanam (Tower), the display and procession of the Gold Chariot and the art gallery which features the history of Sri Adisankara and the Sankara Mutt.

AUROVILLE - Situated in a bustling city of a quarter-million people, the Ashram is not an isolated retreat secluded from the world but a vibrant centre. The dynamic character of the community reflects the aim of Sri Aurobindo's Yoga. Work as an offering to the Divine is an essential aspect of the Yoga, and Ashramites keep themselves useful work every day.

SWAMI VIVEKANANDA ROCK - This grand memorial to the great Indian Philosopher Swami Vivekananda is on one of the twin rocks jutting out from the sea about 200 metres offshore. There is a Dhyana Mandapam where one can sit in a serene atmosphere and meditate. Ferry services are available to reach the memorial. 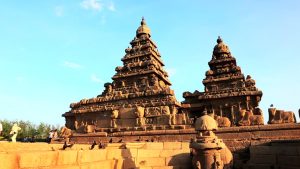